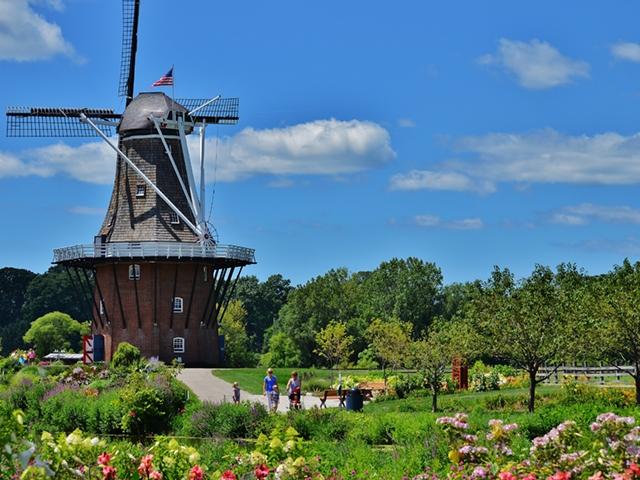 Since its opening in 1965, more than two million people have visited Windmill Island Gardens and enjoyed its lush flowers, walked along the river and canal, and taken in the majesty of DeZwaan – the 252-year old windmill that is the queen of the island and a signature icon of our community.

Now, DeZwaan’s age and the Park’s opportunity have converged in such a way that, together, the Holland community has the occasion to renew our central park so that it remains a jewel for generations to come. A dedicated group of community leaders spent the last six months envisioning what Windmill Island Gardens can and should be for our children and grandchildren. Conceived primarily as a tourist attraction 50 years ago, Windmill Island Gardens now will become primarily a central recreational park for the community while remaining home to some of our community’s most recognizable icons.

This fresh vision for the future of Windmill Island Gardens includes four insights.

Place of Natural Resources. Windmill Island Gardens is a place of remarkable natural resources as it is located in the Macatawa River delta. As Holland has grown around it, the Island remains a remarkable place teeming with living creatures and countless opportunities to enjoy nature.

Center of a Large Urban Area. Windmill Island Gardens is at the center of a large urban area, embracing the City of Holland, Holland Charter Township, and Park Township. In 1960, when discussions were underway about bringing a windmill to Holland, the combined population of the City of Holland and Holland and Park Townships was 37,641; in 2010 it was 86,488 with most of this growth outside the City of Holland. The quality of urban life is greatly enhanced by the presence of green open spaces, such as Centennial, Kollen and Dunton Parks, where people can gather for various aspects of community life. Windmill Island Gardens is such a place at the center of the greater Holland area.

A Park-of-Parks. Windmill Island Gardens is a destination, intersection, and can be a catalyst for the development of both public and private areas from Downtown Holland to Holland Charter Township via walkways and bicycle paths connecting our community in ways as never before

Dutch Heritage in a Larger Context. It is important for DeZwaan, the last authentic mill permitted to leave the Netherlands, to be restored as a working mill. A working mill honors the spirit of those who entrusted it to Holland, Michigan and authentically symbolizes the Dutch tradition of creatively blending urbanization and preservation.

Realizing this vision will require a sizable, but realistic, investment:

Repairing and Restoring Our Dutch Artifacts $825,000

Donations -- large and small -- are being accepted to achieve this vision for the next 50 years. A sizable investment will be made by area governments to participate in this effort.

The most pressing need is the repairs to DeZwaan. In order to have the mill turning in 2014, donations are needed soon so that the materials can be ordered and shipped from the Netherlands and the work completed in the fall of 2013.

Tax-deductable donations can be made in a few ways. Checks can be sent directly to the City of Holland (Office of the Mayor; 270 South River Avenue; Holland, MI 49423), which has established a designated fund for these repairs and improvements. More conveniently, a designated fund -- "Windmill Island Gardens Future Fund"ˆ-- has been established at the Community Foundation of the Holland/Zeeland Area. Donations can be accepted via U.S. Mail or online. Please be sure to designate that your gift is to be directed toward the Windmill Island Gardens Future Fund.

Thank you for your support -- and for making our central park an area jewel for coming generations!