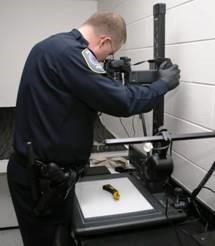 This very important Team is responsible for the collecting, processing and inventorying of crime scene evidence. The Evidence Technician Team uses a specially-equipped patrol vehicle containing all necessary equipment needed to process crime scenes. Collected evidence may include:

Evidence collection is often done at the scene; however, evidence is often transported to the Police Operations crime laboratory for additional processing.

The Evidence Technician is also responsible for the Police Operations holding facility during some hours and the monitoring of arrested persons being held there. Evidence Technicians conduct booking and fingerprinting of arrestees, and do cell checks of all inmates. They also work directly with 58th District Court personnel as well as officers from outside jurisdictions.