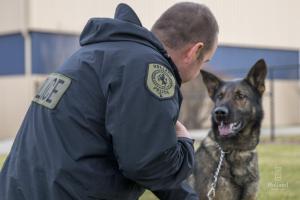 The Holland Department Public Safety (HDPS) K9 Team began in 2001 with the purchase and training of two dogs and handlers. The first two teams were:

After seven-plus years of faithful service, "Grego" was retired as a police service dog and Officer Joe Slenk with "Henry" was chosen to replace Officer Moerland as the next K9 handler.

After 10 years of faithful service, "Harrand" retired and Sergeant Doza took over Supervising the K9 Unit. Officer Reimink with "Niki" replaced him as the new handler. Both "Henry" and "Niki" are now retired and have been replaced by new dogs.

The four K-9 Teams are assigned to the four different platoons but train together one day a week concentrating on tracking, narcotic searches, building searches, article searches, and handler protection.